You will find a comprehensive help menu that covers all aspects of the game. Take a look here first if you have questions. There are also game options available. Flight Controllers can be set up as well with a few mouse clicks in less than 10 secs. Each connected flight controller needs only to be registered once. Below is a quick breakdown of the game elements.

Each vehicle comes with its own tuning wizard. By opening it while flying, you can adjust the flight properties in real time.

A large variety of parameters allows for recreating racers and much more. Details for the currently available vehicles and their tuning wizards are below.

Cosmetic tuning is also available to some extent in the demo version. Here you can change quadcopters and their paint jobs. (see keyboard shortcuts in help sheet ingame)

For simulation purposes, each vehicle saves its own wind settings. With larger height, wind can blow more vertical.

Refinement for larger turbulences and such are planned. A windmeter shows you the current wind strength and how your vehicles movement is aligned to the wind. 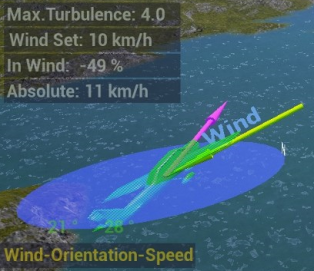 The strength of thermals depends on their age. Thermals will appear, get stronger, then get weaker again and disappear. Thermals are also strongest in their center. Terrain also influences thermal strength. Steep slopes produce more thermal force than flat areas due to higher projected hot area when looking from above. Water does not produce any thermal force. Shadow regions on terrain have lower temperature than sun exposed regions and therefore give less thermal updraft.

The demo version has 3 races for each vehicle and each level. They cover the Bronze Classes. The final game will have Bronze, Silver, Gold and Diamond classes with unlockable flight vehicles. Each vehicles will have those races in each level. Races are time/point races similar to Redbull Airrace and Aerobatics races where stunts have to be performed as well as possible.

During Time/point races you can recharge your battery at the two fly-by towers in the levels, adding a tactical component of when to recharge and what path the fly best to get all gates in the best time and with maximum proximity points.

Each vehicle comes with a variety of camera modes to control it. Modes integrated right now are

Especially the spectator cam resembles someone standing on the ground and flying a vehicle while watching it.

The picture below shows the tuning wizard. Click on each slider in the game to see a description.

The tuning parameters on the left are for quadcopter propertiers and the tuning parameters to the right for its reaction to wind, including advanced effects like ground pushback. Presets are also available to get you started with tuning. Because the simulation is physis based, also gimmicks like ropes are available that you can shoot from the quadcopter to transport crates and such things that are scattered in the level. 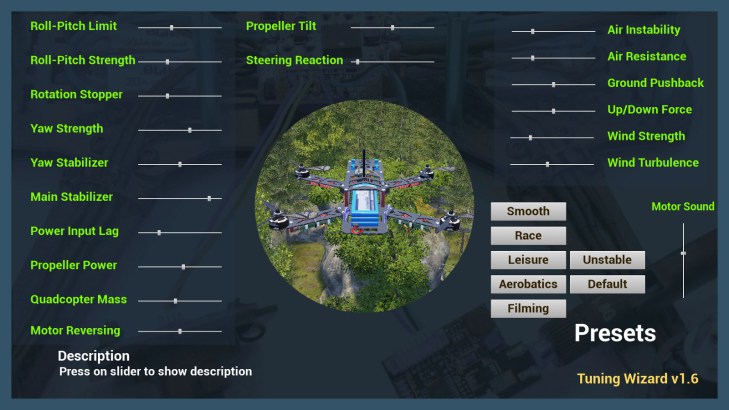 Again there are the wind settings for the airplane and the flight properties. The main difference to many simulations is that you really need speed here to have the controls show effect. For example the aileron will have more effect at higher speeds simply because the air push against it is higher than at low speeds. Some tuning mechanism are still work in progress, for example the upper wing efficency, where you can artificially set the down push created by the top surface of the wings to allow off-axis flying. Over time some more advanced tuning paramters will be introduced. 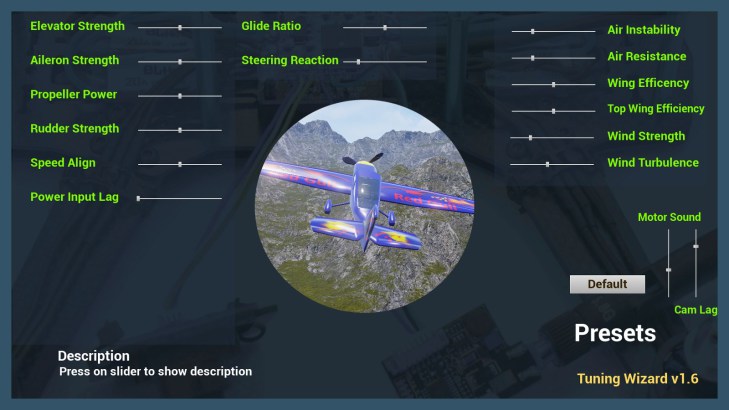 You can adjust the game according to your hardware in the options menu. Even the global playback speed can be changed should flying be to slow or fast for you on default. You can also adjust the cosmetic game settings (fog, brightness, Hue,...) via keyboard while flying. Overall, the game should easily run on medium gaming hardware 2016. Worst performance offenders are marked in the options. 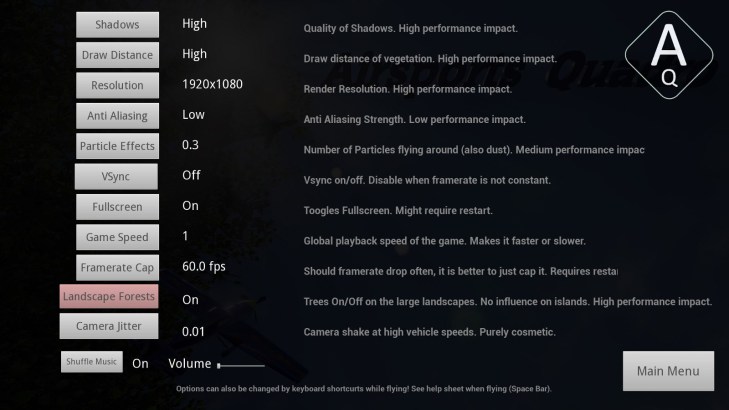